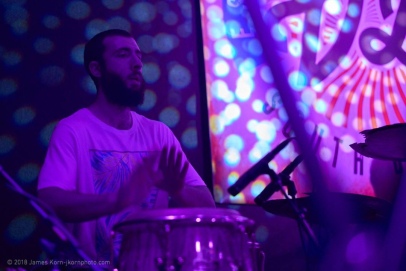 Nicholas Brabhan a.k.a @nickthastick, a Drummer//Percussionist born in South Bend, Indiana began playing percussion in the Jr. high band in 1999 and continued into high school where his passion for percussion really came alive. Inspired by drummer friends in the school band, Nicholas took up the Drum Set, Congas, Brazilian Pandeiro and whatever other percussion instruments he could get his hands on. He became dedicated to playing and studying musical styles from jazz to rock, funk, African, Brazilian, Cuban as well as Avant-Garde and Trance music, studying in places such as Pittsburgh, Montreal CA, Chicago, New York, Houston, South America.

At this same time of early inspiration toward the drums Nicholas developed a strong curiosity in consciousness, trying to understand the types of experiences and insights he began having while playing the drums. He investigated by in depth reading, studying and practicing all sorts of meditative approaches, learning about Taoism, shamanism, psychology, traditional medicine, and anything related to understanding and developing conscious awareness and health.

Soon after high school times Nicholas acquired a Studio Production Specialist Certification from Berklee College of Music and a couple years afterward began studying with Jungian Psychologist and Medical Anthropologist C. Micheal Smith PhD, or “Mikkal” in 2011 in SW Michigan, becoming certified in his Sacred Breathwork, Shamanic Counseling, and most recently as Psychoshamanic Practitioner. This relation became an avenue for Nicholas to synthesize his interests of percussion, music, consciousness and healing into a unique expression. Mikkal and Nick spent 2013-2016 holding group retreats in the Peruvian Amazon of South America where they integrate the understandings of Jungian psychology with the traditional healing systems of the Amazon, incorporating live trance percussion with traditional medicines and ceremonies of the jungle. Through these unique experiences Nicholas has developed a creative and ever evolving method based out of deeply rooted traditions, voicing a special expression to influence movement toward health and balance.

Currently Nicholas is living in Houston, Texas @CasaCazadorHTX teaching his “Unlocking Primal Rhythms” Weekly Workshops as well as working as a Holistic Lifestyle Coach while studying HLC and Corrective Exercise Kinesiology with the CHEK Institute.